Back to the Blog

Conflict Resolution Games: 6 Ways to End Conflict in Your Office 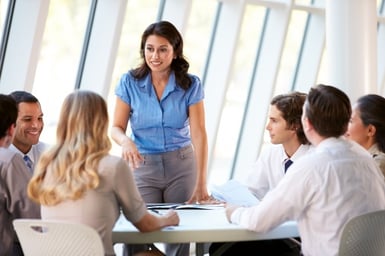 Any sort of conflict in an office setting is guaranteed to damage your productivity. Its bad effects don’t end there, however; conflict makes people unhappy, and the damage it does to company culture can overwhelm every other aspect of the work environment. Your employee turnover will rise if people don't enjoy being at work, and your organization will repeatedly suffer the disruption and costs of replacing employees. Head off this negative scenario by inviting dueling staff members to participate in the following six conflict resolution games.

The Two Dollar Game can only be played once with any group of people because it has secret elements that are revealed in the end. The game appears utterly simple at first: the group is divided into pairs, and each pair is given two dollars. The pair is instructed to divide the two dollars between the two people, in any way they both agree on. Unknown to each player, all players have received some type of secret instruction. These instructions may require players to be competitive, generous or compromising. Secret instructions may also include maintaining a certain demeanor. Further play details include two more surprise rounds as partners are changed and re-joined. Each round is debriefed afterward, and players discover the impact of tangible and intangible factors in negotiations. The surprise element of re-joining previous partners reveals the power of previous interactions in governing behavior towards each other.

The “Win as Much as You Can” game is played in groups of four and takes place in ten brief rounds. It illustrates the outcomes of competition versus cooperation and makes players aware of the interaction of self-interest and group welfare. Each player has two cards, an X and a Y. They choose one card to play in each round, and most rounds must be played without talking. X cards facilitate individual wins at the expense of the group while Y cards facilitate whole-group benefits. During three of the rounds, players are allowed to confer and negotiate. Tally sheets will be kept, and at the end of ten rounds, each individual and group score will be posted. The debriefing is where the real learning takes place as players realize the long-term value of a cooperative strategy.

Divide the Loot is a game that leads a group of people to choose the benefits of teamwork over individual rewards. The room is divided into two teams, "Management" and "Employees," and a set amount of fake (or real) money is handed out to everyone in the room. Each team has a money pot. Members contribute a secret amount of their personal money stash to their team’s pot, but no one knows how much anyone else contributed. The leader will combine the pots, add his or her own secret contribution and then reveal the total amount in the combined pot. Each team then has ten minutes within which to decide on how the money should be distributed, and another ten minutes to negotiate their decision with the other team. The conversations that result from this negotiation, in which nobody knows how much “money” each player held back in their pocket, reveals interesting themes of trust and collaboration.

The Chief Negotiator exercise provides a fun context in which colleagues can practice the skills of negotiation and collaboration. This game is a variant of “Win as Much as You Can,” above, and it can be played with groups of any size. If everyone chooses the self-interest card (A), then everyone in the group loses $2. If everyone chooses the group-benefit card (B), then every player wins $2. However, if only one player plays A and everyone else plays B, the A player wins $10 and all the B players each lose $2. Some rounds are silent, and others allow negotiation before cards are played. The debriefing afterward discusses strategies and outcomes of opposition and group welfare, demonstrating after ten rounds that groups which chose the B cards more consistently end up farther ahead. 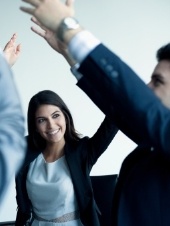 The words “arm wrestling” are never used in this interesting game. Instead, players are paired up and the two leaders demonstrate the position each pair should take. This position is exactly the same as the starting position used in real arm wrestling. Each player is told that he or she will win a point each time that the back of their partner’s hand touches the table. Each player is instructed to get as many personal points as possible within ten seconds, with no regard for their partner’s points. Teams that do best are those that immediately recognize the benefit of flopping their hands rapidly back and forth. Teams that do the least well are those that actually engage in a competitive attempt at arm wrestling. The debriefing afterward is illuminating, showing the power of setting expectations aside.

This is a highly complex simulation game, involving two cities in the fictitious midwestern state of Alexia. The competition between the cities relates to the collection of charitable funds from employee groups. An elaborate “history” of competition between various public and private interests is outlined, and then seven players begin the simulation. Each player represents a specific interest, and each receives secret instructions for the part they will be playing. Play consists of negotiation sessions, in which players attempt to promote individual and overlapping interests. Debriefing consists of discussing alliances and oppositions, somewhat in the nature of a reality show.

Previous
Back to the Blog
Next 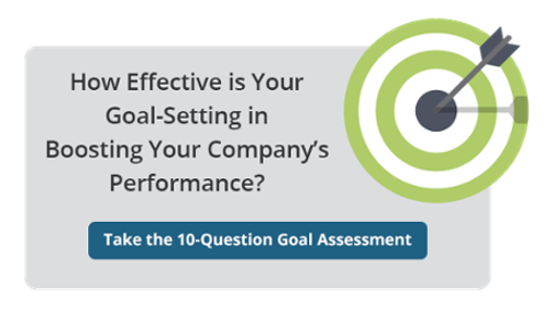